Today we went for breakfast at the Sonaisiali Restaurant. We met for the cruise at 8:15 and headed for the skiff then to the bus to the marina, where we munched on raw sugar cane.

It was then that I heard a chaperone (not one of ours thankfully) ask Rony if Fiji was a third world country. Thankfully, he ignored her question. Sometimes, people’s ignorance astounds me. We got to our cruise ship, greeted by music and orange juice. We took seats on a couch, and the boat launched. We had morning tea with fresh fruit, and then participated in a traditional Kava ceremony.

After about an hour, we arrived at the island called Tivua Island (or Mystery Island.) We took skiffs and glass-bottomed boats to reach the shallow waters that the yacht couldn’t, then waded through the shallow water to the sand. Despite the wait and effort it took to get there, the island was beautiful. We got mats and laid them out under straw umbrellas, grabbed snorkeling gear, and headed to the reefs with a group of people and an instructor. It took a while to adjust to abnormally large flippers, face mask goggles, and breathing tubes. But the views of the coral and trpical fish was above and amidst were amazing- it was like being in “Finding Nemo” or the aquariums in the doctor’s office. We saw clown fish and angel fish, then headed back to land to take a glass-bottomed boat ride. We could see the sea floor from the boat, but too many of the obese variety were in the boat, and it kept getting water logged, so everyone had to get out and walk back to land. on the way, we hunted for sand dollars and blue starfish and hermit crabs.

Lunch time: chicken and fresh fruit, what else? We headed to the kayaks with canoe paddles and life vests. I took the single and my roomies took the double, and we raced which was a lot of fun. When we went back to shore, we went snorkeling again, eager to get close to the sea life again. This time, I held a sea slug, and noticed a lot more sea life than I had earlier. I guess that’s what happens when you stick close to your guide. Afterwards, one of my roommates and I talked with him some more. He was extremely hurt that we hadn’t learned anything about Fiji in school. When we went ashore to change back into our clothes, I couldn’t tell bug bites from sea lice bites (they’re little bugs that come to bite during the first days of the month in warm waters.)

When we had finished changed in the little hut with five other strange ladies (flashback: high school locker rooms), we got in the skiffs and went back to the yacht, where we had afternoon tea. We watched a coconut breaking demonstration, then listened to the band (equipped with claves, a ukulele, and guitar) just have a good time performing for the group.

We got to the marina, and went to dinner at the Hard Rock Cafe to celebrate our last night in Fiji. It started raining mid-meal, so we took our plates under an awning to finish retelling our favorite Fiji memories. On the bus back to Sonaisaili, it was dark and bumpy. There are practically any road rules here, so it felt a bit like a Disney roller coaster.

Tales of the South Pacific: And so I return! (Fiji Day 1)

Well I’m finally home from the South Pacific, and what an amazing trip that was! I wrote in my journal each day, with hopes of coming home and blogging to you about it. I’ll post one country each day, so here comes Fiji!

Bula! Which in Fiji is the greeting meaning “life”. I love the Fijians sense of community. Our tour guide from Sonaisaili, Rony, keeps referring to us as “family” and tells us “Welcome home.” He says Fijians feel they owe a lot to Americans for their help during the Second World War, by bombing the Japanese.

After a 6 hour flight to LA, and a 3 hour layover in LAX, we boarded our double-decker airplane for Fiji. Homesick already. Then we landed around 5 AM local time, and did the customs dance, eating all of our food in our carry-ons in ten minutes time. Then we made our way to the island of Sonaisaili, one of Fiji’s 230 islands.

We sat down to drinks of papaya, mango, and watermelon, garnished with coconut slices. Note: Those slices were for garnishing ONLY, NOT for eating.

We then went to a giant breakfast buffet, which was certainly a sight for sore eyes (and stomachs) after managing terrible ariplane food.

After, we headed to the small skiff that ferried us to Fiji, then took a bus to Nadi (also known as Nandi.) Rony gave us the same speech, pitch, and jokes as he had on the way from the airport. We stopped at the food market where vendors sold fresh organic fruits and vegetables. I felt like such a tourist, observing the market. I would’ve rather been able to shop on my own among the Fijians.

Then we had free range of Nadi. My two rommates and I walked up and down the block, trying our hardest to ignore the chorus of “Bula!”‘s and “Ladies, come here, to MY shop!” Per suggestion of a kindly shop keeper, we dodged in and out of what appeared to be safe stores, and looked for food in the grocery store. There was no good health food as we’d seen in the farmer’s market- only junk. So we sought out lunch at an Indian restaurant (caesar salads, garlic Naan, and Chicken Takki- yum!) The food was authentic and delicious, well then again I was the one ordering the Indian food for the table.

We later on debated whether or not to tip. The fact we had four waiters over the course of the meal led us to settle on no. We headed back to the bus, and ultimately Sonaisaili to lie on the beach under the blazing sun. At 3, our rooms were finally ready for us, and we retrieved our bags from the conference room we’d previously been using as a make-shift changing room.

86- B86, our little slice of heaven beach house. No electricity. Don’t get me wrong, there are lamps, outlets, light switches, and fans, but none work.

3- Number of phone calls made to the front desk before someone showed up to fix the electricity issue. We felt like idiots when the maintenance man showed up, because he simply removed the tab insert in the wall that allows electricity to flow trough our rooms. Apparently no one else had this issue- whoops.

1- Number of lizards currently inhabiting our beach house. (Also the number of lizards needed to scare the crap out of 3 teenage girls, but we names him Hula anyway, and decided to live in harmony with it.) 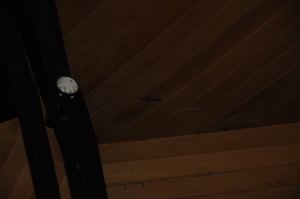 Can you see him?

I’m sitting on the deck of our beach house, watching the sun slowly obliterate my view of the blue ocean. The waves, now a sea of white light, no horizon. The sky and ocean are one, too bright to look directly into.

Dinner was good, another awesome variety. We all headed to our rooms around 7, exhausted from a long day of activities. One of my roommates and I tried to sneak over to the boy’s beach house and scare them, but a lack of energy from our long day made us give up on the plan mid-way.